Craig Bergsma of Chronodeco is a man committed to honoring the past. A conversation with him could touch on any of a variety of topics including 1960s chronographs, early hot-rods that he built, the art-

deco numerals on the dial of an antique Longines, racing sailboats and flying all over the world in the 1960s, or the Alfa Romeos he and his brothers drove as young men.

Knowing this, it should come as no surprise that his watch business is equally dedicated to maintaining an ethic of classic design and old-school service. After a brief introduction to the brand, we will present the new Positano model from Chronodeco, the first non-chronograph from this boutique brand. Later you will learn of the company’s commendable dedication to the conservation of vintage timepieces. 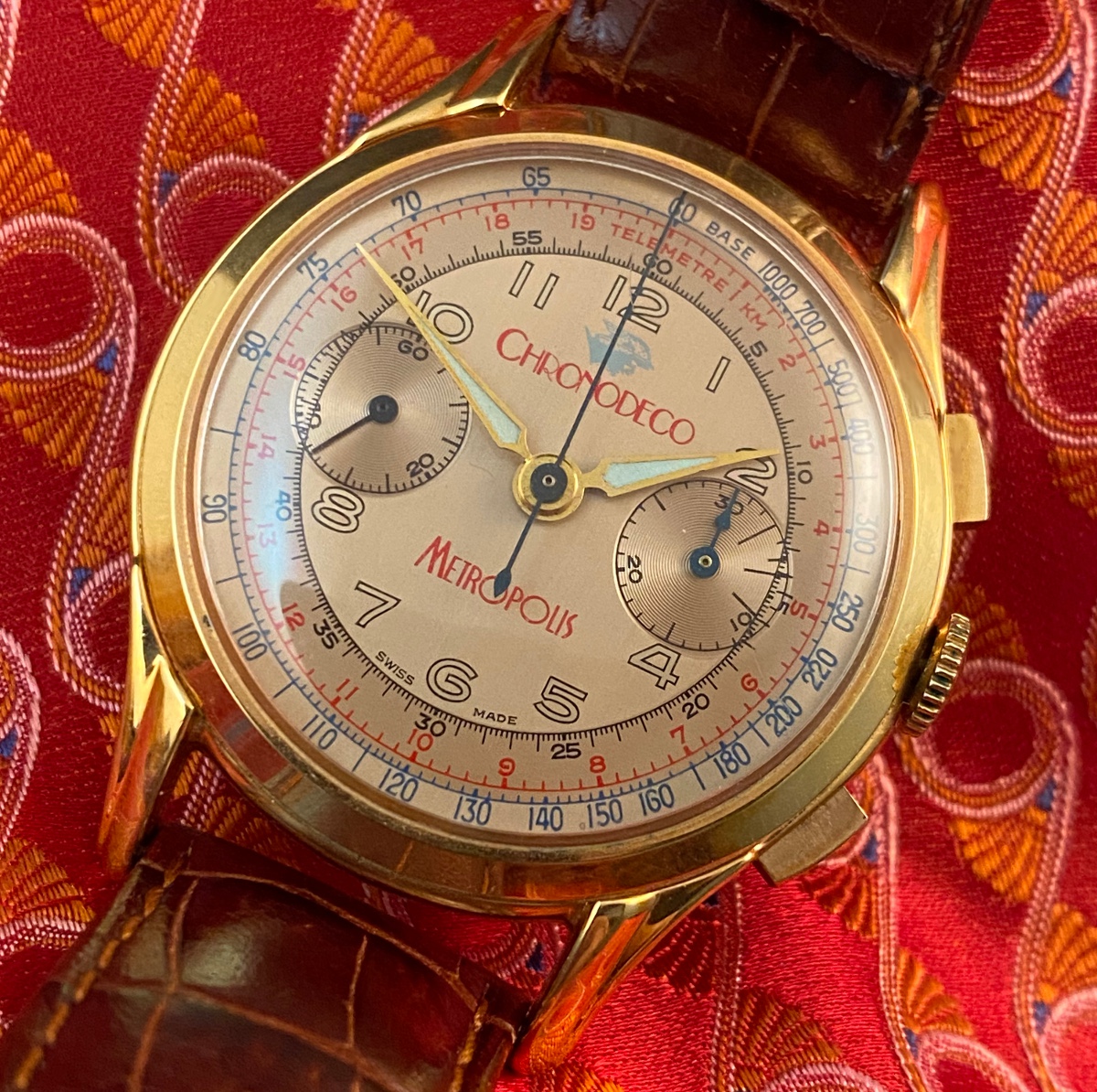 One of just a few small American watch brands, Chronodeco first came on the scene in 2001 with a fresh idea, though one rooted in history. Bergsma had a vision to build a small series of chronographs using nothing but vintage components. The result was the limited edition of thirty watches in the firm’s Metropolis collection (pictured at left).

He fitted new old stock cases and dials with well-preserved and fully serviced vintage chronograph movements. Features such as Chronodeco’s retro modified Mercury-head logo, dials and hands in a variety of styles and colors, and 37mm rose gold-plated cases, made these an instant hit with collectors. The Metropolis series sold out in short order. The equally stunning Phaeton, in an edition of twelve watches, was sold out a year later just a few months after introduction.

Building on these successful debuts, Bergsma followed up with modern watches envisioned along the same principles; thus were created the Era and the Contrail.

The Era watches, in a series of 250 pieces, feature the same bold art-deco design aesthetic as Chronodeco’s previous pieces, but are built from modern components to Bergsma’s specifications. Parts and production advice were provided by the RGM Watch Company and Chronodeco assembles the watches. Available in a smaller edition of twenty-five, the black-and-grey dialed Contrail model brings together Bergsma’s love of watches and flying, and pays tribute to his family’s history of involvement with flight. Information about all past and current models can be found at Chronodeco.com.

In the process of searching for vintage watches and parts for his own collection and restoration projects,

Bergsma encounters countless items that inspire ideas for new projects. Among them was the discovery of a cache of NOS cases, movements and dials that fit nicely into his vision for Chronodeco.

The new watch, built from these parts, is called the Positano. Although it represents a departure from previous offerings—it is Chronodeco’s first non-chronograph—it does clearly mesh with the lineage established by its predecessors.

In spite of being constructed entirely from vintage components,

this collection has a strikingly modern presence thanks in large part to the oversize case with its elegant lugs. Measuring 38mm in diameter and 9mm high, the Positano makes a bold statement with either the black or silver dial, each of which works well with the rose-gold color of the case and crown. The supply of parts limits this release to twenty pieces: twelve with silver dial, gold–plated markers, and blued steel hands, eight with black dial and white hands.

The movement in the Positano is another of the many inviting features of this watch. As other famous brands such as RGM, Chronoswiss, and Dubey & Schaldenbrand have shown, there are numerous alternatives to the ubiquitous ETA movements one sees on the market. Though ETA movements clearly have earned their place,

an appealing option is the use of vintage movements. Chronodeco has been fortunate to obtain the uncommon Caliber 176—from the respected maker Unitas—which was originally packaged with new old stock cases and dials.

This 13-ligne movement, long out of production, is similar in design to the oft-seen Caliber 6497 (16.5 lignes), but was not as widely employed.

While the new watch was in the planning stages, Bergsma and his wife Colleen visited Positano on the Italian Amalfi Coast and fell in love with this small seaside hill town. He couldn’t resist naming his new watch after the city that John Steinbeck explored and wrote about in 1953 for Harper’s Bazaar. “Positano bites deep,” Steinbeck wrote. “It is a dream place that isn’t quite real when you are there and becomes beckoningly real after you have gone.”

Bergsma commissioned his sister Shawn to create a special logo—an elegant calligraphic script of the town’s name—to adorn the dial along with his own company imprint. The overall presentation is just what he desired; at a glance the Positano appears to be a perfectly preserved watch from the 1940s, yet each watch is a recent creation from NOS parts. Even the dials are vintage, though they have been professionally stripped and finished, to enhance their longevity, according to designs by Bergsma.

Prices for watches from the Positano collection start at $695 and include a mechanical guarantee of six months excluding the balance staff, which is not mounted in shockproof jewels. Each watch will be hand-assembled by Bergsma. Chronodeco exclusive calfskin straps with rose buckles complete the vintage look of the package.

In addition to building new watches that are intended to celebrate a glorious era, Bergsma is committed to preserving the remnants of the past. The remarkable exercise in restoration exhibited on page 218, a one-of- a-kind half-restored vintage chronograph, showcases the variety of services—movement repair, dial refinishing, and re-plating of cases—also available from Chronodeco.

Most collectors will understand the sort of questions a watchmaker must field in dealing with customers who desire to return their beloved pieces to their original glory.

Watches arrive for inspection at the Chronodeco workshop in every imaginable condition—plating worn down to the base metal, pitting and deep scratching, dials and movements corroded almost beyond salvation. It is nearly impossible to imagine that the recovery of some pieces is possible…until you see the “before and after” pictures that most restoration services provide.

The Chronodeco web site shows a number of such projects, but Bergsma decided to go one step further and attempt to bring the before and the after of one remarkable example directly to the public.

He started with a severely aged vintage Chronograph Suisse needing movement service, dial refinishing and case re-plating, at a minimum. The twist on this restoration, though, is that he intended only to do half the job, so that the watch itself exhibits both the starting and end points of an extreme restoration project.

In simple terms, the case of the project watch required filling in some pitted areas, polishing a filled segment, and carefully electroplating only half of the case. A corresponding area of the dial would need to be restored, but this proved impractical, so Craig employed two dial sections—one of the worn and faded original and one of a NOS dial—to show the contrast between starting and finishing condition.

Of course, being a perfectionist, Bergsma completely serviced the Landeron movement so his exhibition piece would be working perfectly. However, this only enhances the novelty.

This showpiece, called the "Half-Fast Chrono,” has drawn much attention at conferences and collector gatherings across the US. Even in a display case surrounded by Bergsma’s favorite vintage pieces, such as a 1960s Heuer Carrera and a rare 1940s Gruen 1-button chronograph, the Half Fast easily draws the most attention After members of the public (and the industry) have seen this example of his work, it is easy to know why Chronodeco restoration services, as well as limited edition watches, are in demand.

Aside from his avocation in the world of watches, Bergsma’s vocation is that of a metallurgical engineer at an aluminum company. Among his professional achievements are the development and patent in the late 1990s of AA6069, a registered high-strength aluminum alloy. Today this alloy is used in high-end bicycle frames made by firms such as Santa Cruz, Cervelo, and Cube in Germany. It is also used extensively in forged airport runway landing-light housings. Craig has been involved with aluminum technology for more than thirty-five years and has dozens of published papers and several more aluminum patents. While this background helps in restoring watch cases, he says that working in auto body shops right after completing high school probably helped the most. Craig expects to retire from the aluminum industry in a few years but insists he’ll continue working on old watches and building new ones for many years to come.

Click the image at right to read an article about the Chronodeco 1968 series of hand-wound chronographs...

Update (July 2020)-- I've been in touch with Craig just recently and he indicated to me that he has retired from the watch business. His website has also been disabled, so some images he hosted which I linked in my articles are in the process of being restored. I'm sorry to hear Craig is no longer contributing to our beloved hobby, but wish him happiness in his next adventure.