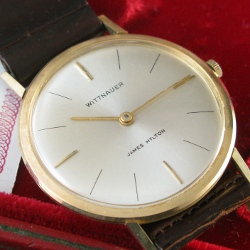 Description: This wristwatch is a hand-wound 1963 Wittnauer presented in period to James Hylton by the Ford Motor Company’s racing program known then as Ford Total Performance Team. Engraved on the back with FORD DIVISION TOTAL PERFORMANCE TEAM 1963, and on the dial with the recipient’s name, this wristwatch includes its original box and papers, signed straps and buckle, and is in 100% original condition.

A small number of individualized Wittnauer wristwatches were presented to members of Ford-supported motorsports teams in series including NASCAR, drag racing, endurance and sports car racing, in recognition of their efforts in 1963-1964 to design and campaign Ford (eg, Galaxie, Falcon, GT-40, Shelby Cobra) racing cars worldwide. Having been previously focused on safety rather than performance, Henry Ford II lifted an internal competition ban and committed FoMoCo to become a force in motorsports after his famous failed bid to acquire Ferrari. It is not known how many such watches were produced and presented, but other known recipients include driver Graham Hill and Ford GT-40 program manager Al Dowd. Leonard Wood (of the Wood Brothers NASCAR racing team) received a similar watch in 1964.

James Hylton was a crew chief in NASCAR during the late 1950s and early 1960s, before becoming a privateer driver. He supported hall-of-fame drivers Rex White and Ned Jarrett and won two NASCAR championships as a crew chief (1960, 1964) before driving to the 1966 NASCAR Rookie of the Year award, finishing the season second to champion David Pearson. He formed his own race team in 1968 and continued driving Winston Cup races until 1982, although he came very close to qualifying for the 2007 Daytona 500, at which point he would have been the oldest racer to compete, at age 72. His final race was October 2013 in the ARCA series; he finished 18th. Hylton had an astonishing 50% record of top-10 finishes (301 of 602 races) in NASCAR’s top flight. Mr. Hylton died in a highway accident, en route home from a race weekend, in April of 2018, aged 83. In 2020 I purchased the watch from a member of Mr. Hylton's family to whom it had been given after his death.

This uncommon ultra-thin watch is Wittnauer reference 49-260 and features a 14k gold filled Ross case, hand-winding 17-jewel Swiss movement (Wittnauer caliber Cal. 10M), and measures 33mm in diameter with a thickness of only 6mm. The condition is nearly un-worn, with the only visible defects being a minor blemish or two on the original low-profile acrylic crystal, and wear and curvature to the leather straps resulting from decades of storage. The original box includes a removable display platform, and contains the original descriptive tag and warranty pamphlet. All components of this package are signed, authentic Wittnauer, including box, papers, dial, case, movement and crown.

The watch is winding and running, and is very clean but its service history is unknown. The lack of jeweler’s marks inside the case suggests that before being opened for examination and these photos, it has not been touched since leaving the factory. The 10M movement is a very thin 17-jewel hand-wound caliber (base Peseux 7000) featuring engraved details on plates and bridges with a copper finish.

Accompanying this watch is a 2-page period Ford Total Performance advertisement extolling the brand’s achievements in racing during the 1963 season (stock cars, sports cars, rallying, etc.), and expounding upon its offerings for the 1964 model year.

This watch has been sold. If you have information about this or other Ford Total Performance watches, please This email address is being protected from spambots. You need JavaScript enabled to view it.. 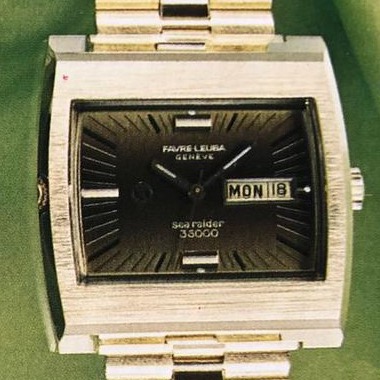 Description: This is an all-original F-L Sea Raider wristwatch with hi-beat movement running at 36,000 vibrations per hour (ticking at 1/10th second).

The present example has a steel case with signed back (marked with reference number). The original bracelet by Novavit S.A. steps down in width from 22mm to 18mm and has a signed clasp (F-L hourglass logo). The case of this model shows crisp edges, indicating is has never been polished and, though there are some scuffs and obvious signs of use, is very well preserved for a nearly 50-year old timepiece. Favre-Leuba’s Sea Raider series uses case construction very similar to that of the Rado Manhattan and, indeed, this example is very similar in style to the second series of Manhattan (known as Manhattan V). For more information on how these remarkable cases snap together and use an integrated moulded crystal and rectangular gaskets to preserve water-tightness, please see my article on vintage Rado automatics. As this watch is running very well, and the integrity of the o-rings and other structural components appears to be fully intact, I have chosen not to open this watch for inspection and photography.

Based on info from Favre-Leuba, the movement in this watch is presumed to be an FL1164 (more information via this link), which is the day-date version of the 1162 found in the date-only Favre-Leuba Chronometer 36000. This family of movements was reportedly created via a joint venture between Doxa, Eberhard, Favre-Leuba, Girard-Perregaux, and Zodiac, and based on the A. Schild caliber 1687. Fine regulation of the FL1164 is via the Triovis method.

Pictured below is an original Favre-Leuba Sea Raider box, which is not present with this watch. Made by Cartolux S.A., this is a roughly square multi-piece sliding box that has lots of FL imagery and exhibits strong similarities to the longer, narrower box seen with another FL from this period, the ca. 1970 Chronometer 36000.

This watch is available for purchase.
Please use the e-mail link below for enquiries.

These watches have been sold. 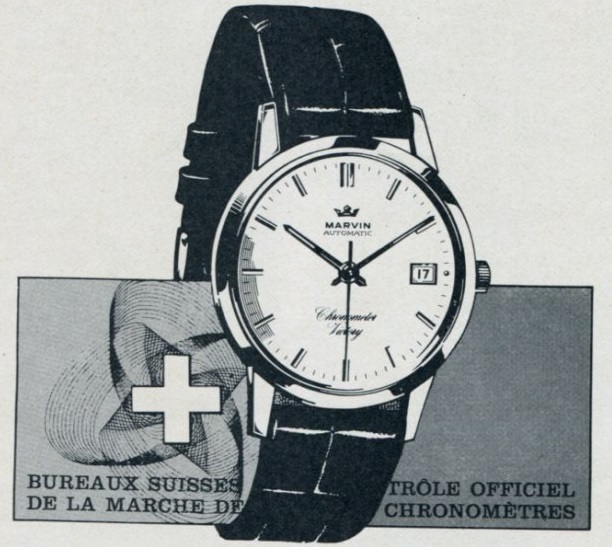 Description: Pictured herein is a 1963 MARVIN Chronometer Victory with original box, made by the famous MARVIN S.A. watch company, at the peak of their independent production. This features a steel screw-back case (with waterproof sea-star logo) and the in-house movement Caliber 620A, with 4-digit chronometer certification number. Unfortunately, the chronometer certificate is not present, but the original box is. It is worth noting that, as with Rado and many other makers of that era, non-chronometer movements were not marked chronometer on the dial, nor did they have numbered movements. This also has the correct Marvin crown, signed with their crown logo. The entire package is in very good original condition--it has not been polished nor tampered with. Per the timing machine info below, you can see that the watch is running very accurately (most recent service date unknown).

To see some excellent photos of a very well preserved Marvin 620A wristwatch (and dozens of other significant timepieces), visit the site of my friend SteveG.

Period advertising images found on the web:
If you assert the copyright to these, please contact me and I'll be glad to assign appropriate image credits. 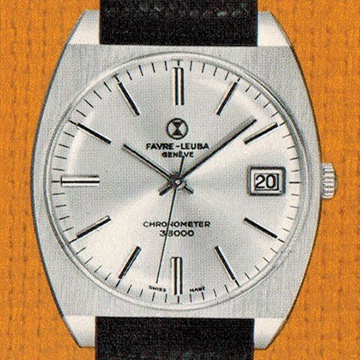 Description: This is a rare F-L chronometer-certified wristwatch with hi-beat movement running at 36,000 vibrations per hour (ticking at 1/10th second).

The present example has a steel case with signed screw back (marked with reference number). The original bracelet by Novavit (NSA) has a signed clasp (F-L hourglass logo) and fitted end-pieces. At the time of writing (Aug 2020), the watch has just received complete movement service and the finish of the case has been restored nearly to like-new condition.

The original Favre-Leuba display box, equally rare (if not more so), is present with this watch. Made by Cartolux S.A., this is a multi-piece sliding box that has lots of FL imagery and can be propped up to display the watch or closed to lay flat. It includes the tagline “ça c’est Favre-Leuba”. 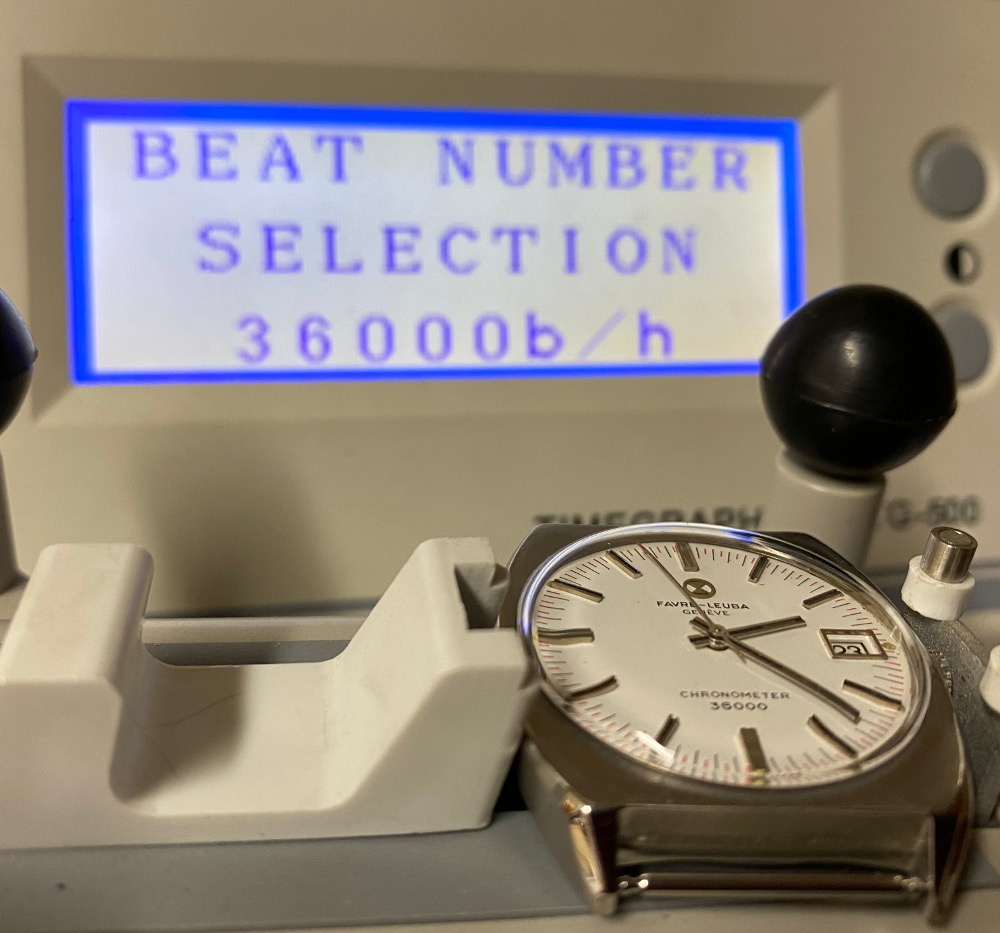 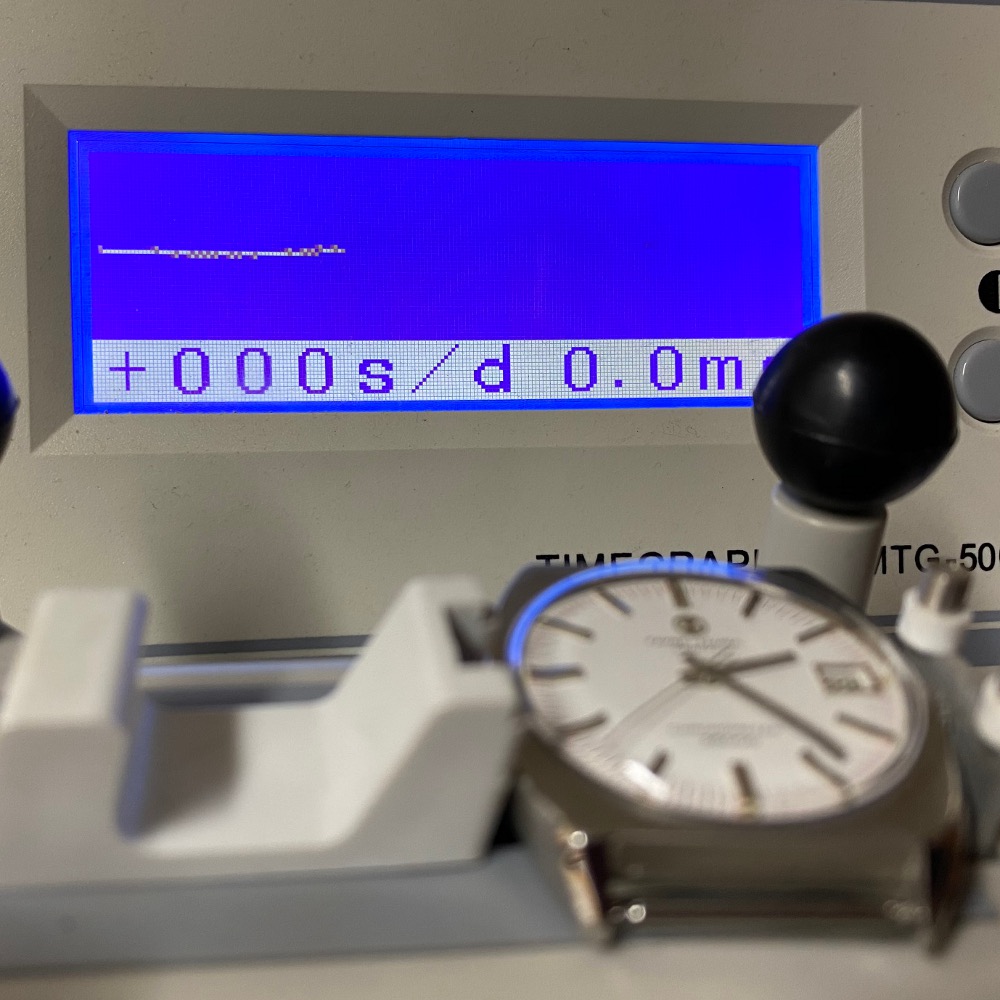 In the world of horology, myriad buzzwords and fleeting trends circulate, but there are few concepts that true watch connoisseurs respect so much as ‘quality’ and ‘exclusivity.’ A novel venture in Germany, featuring some of the most respected names in the business, is providing these to a small and privileged clientele through the Grieb & Benzinger Platinum line. In recent years, Hermann Grieb and Jochen Benzinger have been producing one-of-a-kind timepieces that combine fine vintage movements with world-class decorative artistry.

Their aim to create the industry’s most interesting and exclusive products has led them to join forces with their friend Georg Bartkowiak, an experienced design and technical consultant to the watch industry. This trio is presently offering watches unlike anything available elsewhere: truly unique bespoke watches based upon historic high-grade complicated movements that are expertly modified, decorated, and housed in solid platinum cases.

An example of their work—the brand plans to offer no more than 10 watches annually—contains a 19th-century minute repeater caliber provided by Patek Philippe for Tiffany. The movement was restored for 4 months by Hermann Grieb, who modified it to a regulator display. For this watch and all others in the Platinum line, components needed for the modification are produced in-house by Herman Grieb. Grieb & Benzinger Platinum watches do not reply upon outside parts sources, nor do they depend upon modern manufacturing techniques. According to Mr. Bartkowiak, Hermann Grieb “uses the same techniques & tools to restore the watch that were available the days when the historic movements were built originally. This is pure watch-making in the spirit of Abraham-Louis Breguet.” To the modern mind, this singular concept may sound potentially limiting, but Grieb & Benzinger prefer to view it as opening up the possibilities envisioned by the masters of previous ages.

Grieb & Benzinger Platinum watches are also distinguished by the use of a stunning blue movement plate. This is a proprietary technique of blue platinum coating which was developed in homage of Charles Oudin, the student of A-L Breguet known for producing blue plates in the early 1800s.

The decoration of G&B Platinum watches is provided by Jochen Benzinger utilizing a variety of techniques such as hand engraving, skeletonization and guilloché, the latter produced via a veritable museum of antique rose engines restored and maintained by Mr. Benzinger.

As is obvious from the dedication and focus of their makers, Grieb & Benzinger Platinum watches represent the execution of a complete vision for producing the finest wristwatches available. The client who commissions such a machine is integral in the conception and delivery of a tailor-made unique item, even to the extent of choosing the movement which will be transformed to the heart of the remarkable timepiece, of assisting with decorative design or perhaps mechanical layout. For such offerings, Mr. Grieb has been very selective in procuring an assortment of very fine and historic movements of the highest quality from such makers as Patek, LeCoultre, and Lange, many of which are repeaters or rattrapante chronographs. His preservation and reinterpretation of the original movement is merely the beginning of a painstaking process of remarkable transformation in which each contributor’s efforts are significant.

As the name suggests, the Grieb & Benzinger Platinum line features cases of that noble material as well as the high level of execution; only solid platinum cases are used. The cases are fashioned from solid platinum with no soldering of lugs or other elements. The minute repeater shown here has a case containing over 130 grams of platinum. According to Mr. Bartowiak, “this watch features the most solid platinum case on the market.”

Connoisseurs wishing to explore their options may contact Grieb & Benzinger directly or visit the brand’s representatives, of whom five will be named worldwide. Les Ambassadeurs in Switzerland is the first. Home service is available for consultation on the project and pricing of G&B Platinum pieces depends on the level of execution but generally start in the range of six figures (Euros). New pieces are continually being developed, such as a modified minute repeater with additional functions and a modified split second chronograph, expected to be available this summer. Before the end of 2010 the brand plans in to introduce a proprietary tourbillon movement—developed entirely in-house. The most current information is available by contacting Grieb & Benzinger via www.grieb-benzinger.de.

To read about watches by Jochen Benzinger, including having a custom watch bulit, please csee my article here.