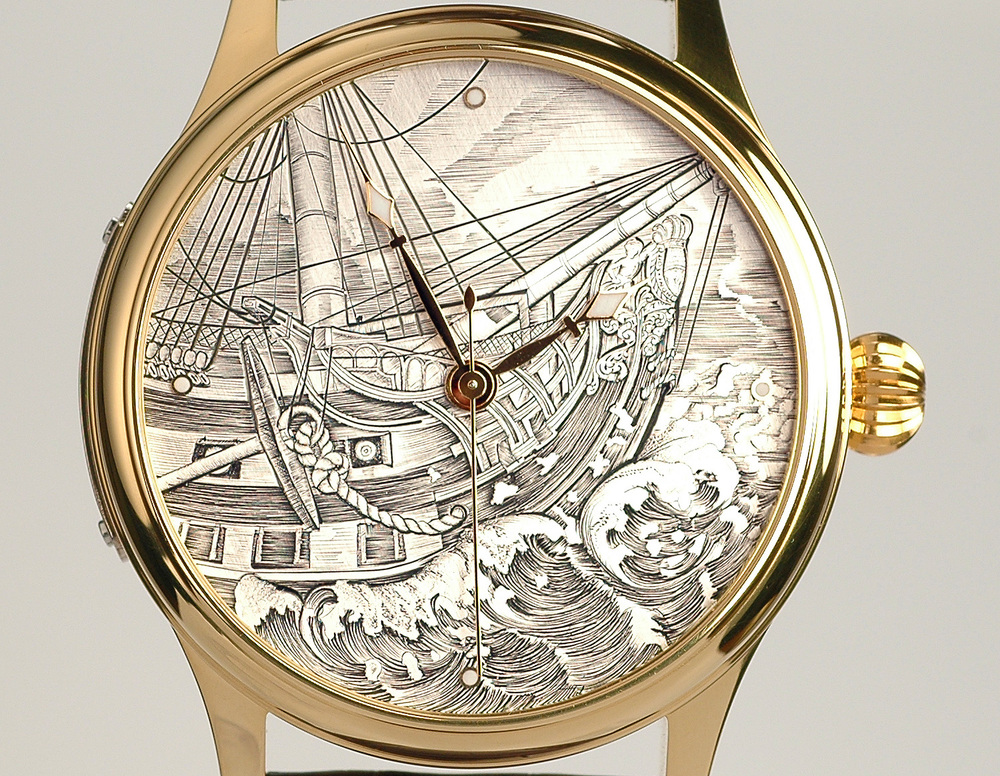 21 October 2005, Lancaster, PA. In celebration of the 200th anniversary of the Battle of Trafalgar, RGM Watch Company announces a new addition to its Tall Ships commemorative watch series: RGM Reference 200, HMS Victory. Each Victory watch features a unique, hand-engraved dial with a different depiction of the venerable ship--a typical example shows her sails set resolutely and cannon ablaze amid the chaos of the Battle of Trafalgar. Other dial images will be available, each based upon original artwork by RGM's chief designer. The dials also feature applied dot hour markers and hands of yellow gold with subtle luminosity for visibility.

The 42 mm case exhibits the recognizable RGM style but is fashioned in 18k yellow gold with a white gold plaque to display the name HMS Victory. A hand-engraved display-back commemorates the date of the Battle of Trafalgar and allows an unobstructed view of the modified Valgrangres 16.5-ligne automatic movement. The movement is adorned with authentic guilloché and a solid gold rotor engraved with a representation of the ship's figurehead and her motto: Honi Soit Qui Mal Y Pense. This edition of six unique pieces combines the most up-to-date RGM watchmaking technology with the finest of old-world craftsmanship. Few makers of fine timepieces offer this combination of hand engraving, hand-turned guilloché, and the personal attention to detail that RGM requires of each watch they produce. 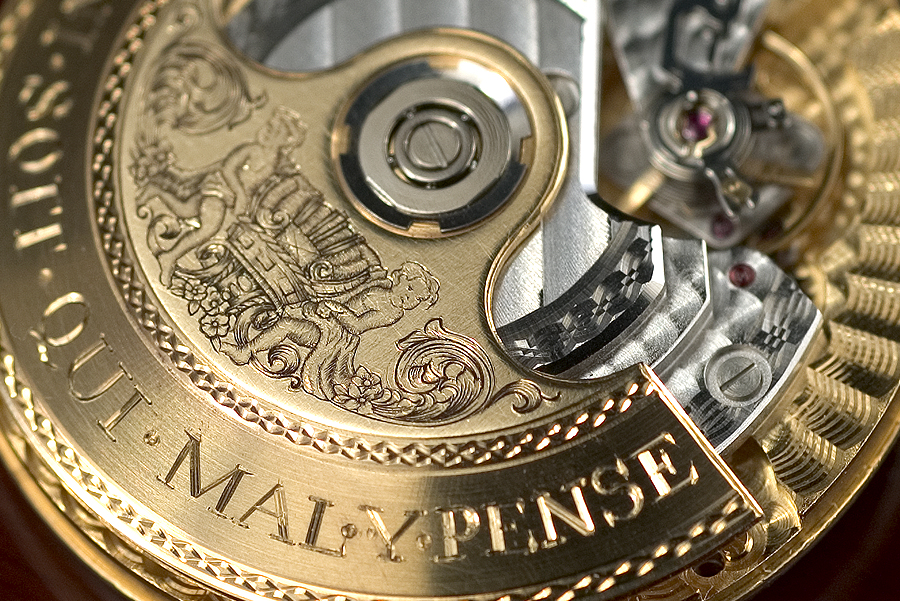 Inspired by their love of sailing vessels, RGM founder Roland Murphy and his team plan to use the Tall Ships series as a vehicle to commemorate some of the world's elite historical ships. Each edition will be approached differently by the RGM team, and the watches themselves will be as different from one another as the ships they represent. The inaugural watch in RGM's Tall Ships series was Reference 170, introduced in 2004 to commemorate the 150th anniversary of America's last all-sail warship, USS Constellation. The Constellation edition was limited to 25 pieces in 18k rose gold with a coin-impression image of the ship on the solid silver dial. 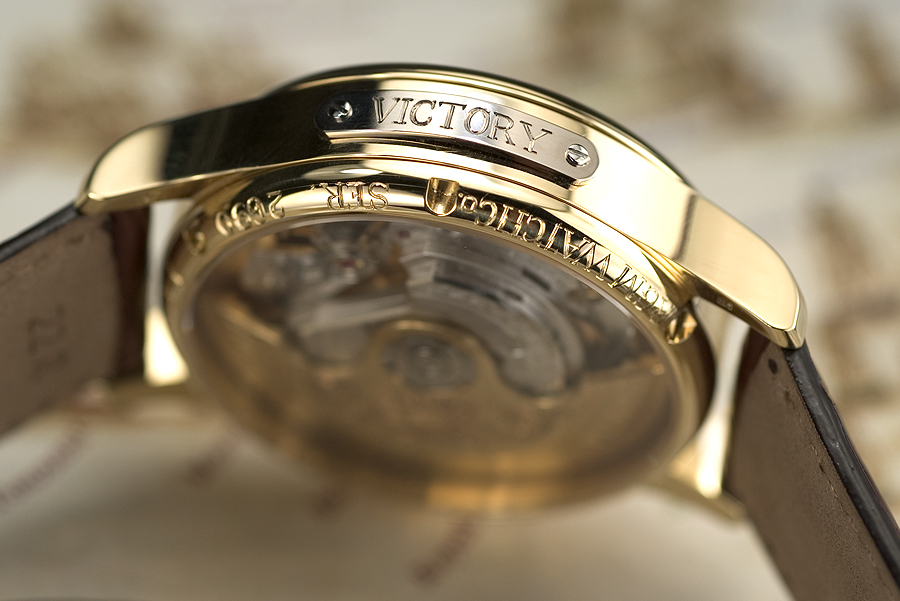 HMS Victory, moored on display at Portsmouth Historic Dockyard in England, is revered as the world's oldest commissioned warship. It was launched in 1765 and received its commission to the Royal Navy in 1778. It continued in active service for 32 years and was the flagship of the British fleet at the decisive Battle of Trafalgar. During this battle, the British fleet captured the commander of the combined French & Spanish fleets and nearly two dozen ships. British losses included 1500 men but no ships, while the opposition included roughly 14,000 men killed or captured. The most significant loss to the British, however, was their commander Admiral Lord Nelson who was struck in the spine by a sniper while aboard HMS Victory. 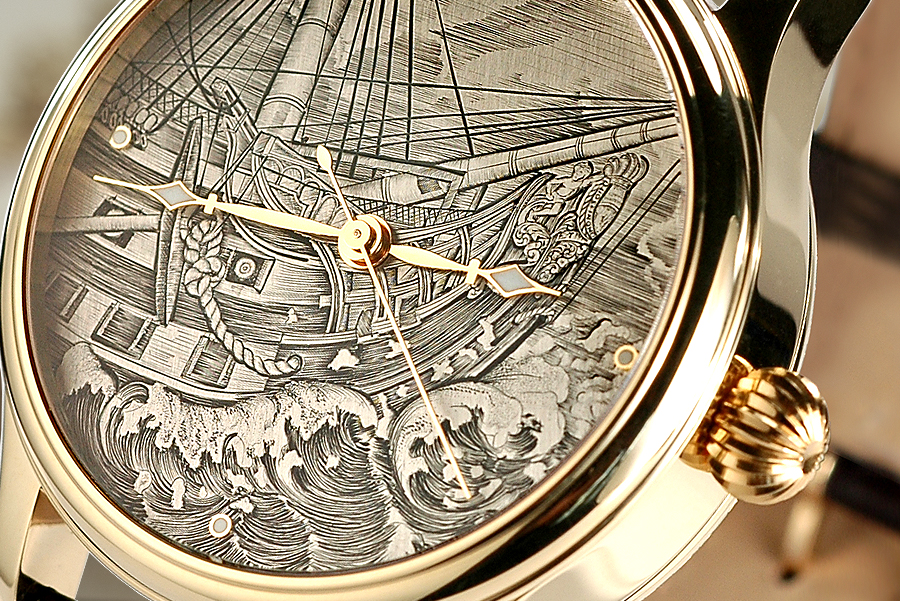 At the time of his death, 4:30 PM on the 21st October, 1805, he was assured of an English victory which deterred Napoleon's planned invasion of England and ensured British naval superiority worldwide.

RGM Watch Company is located in the heart of one of America's premier historic watchmaking centers: Lancaster County, Pennsylvania. An independent firm, RGM produces fine watches including a minute repeater with tourbillon, the William Penn collection of elegant rectangular watches, a series of steel pilots' models, and special editions utilizing the nearly lost arts of engraving and engine-turning. Mr. Murphy's company is one of a select number who will endeavor to make a totally exclusive, unique, high-grade timepiece at the request of the customer.