The first watches built with a new American-made movement

are coming from RGM Watch Company

In the March 2008 issue, iW was honored to announce the introduction of RGM Caliber 801, the first mechanical watch movement to be produced in series on American soil since the late 1960s. Named for the street address of the RGM Watch Company’s workshop in Lancaster County, Pennsylvania, the new movement represents a bold step in American horology, and one that owner Roland Murphy hopes will bring international attention to his company and to the United States as a watchmaking center.


The first watches containing Caliber 801 are being produced as this magazine goes to press and so the photos represent only a small number of options that will be available to those interested in purchasing an 801-powered RGM watch. A significant number of watches the company produces are customized to some degree--perhaps a custom dial, special movement engraving, or a completely unique piece--and the RGM team expects to produce personalized versions of the 801 immediately upon its introduction.


The standard model will include a silver dial decorated with guilloche cut in-house on RGM's vintage rose engines. A subtle "801" nameplate will be visible on the dial. Blue steel hands and fine leather straps will also be included, but the focus of this watch is, of course, the movement. For that reason, a large glazed caseback will offer a panoramic view of the glorious innards.


An attractive option for the connoisseur desirous of something out of the ordinary is a dial-less RGM 801. The dial-side of each Cal. 801 plate is manufactured with a lovely engraved logo and functional numerals at 6:00. 9:00 and 12:00. With the contingency of a dial-less watch already well thought-out by RGM all that remains for the buyer is to decide upon a decorative finish from the large number of perlage and guilloché options pictured at RGMwatches.com. Gold and rhodium plating in various colors is also available. 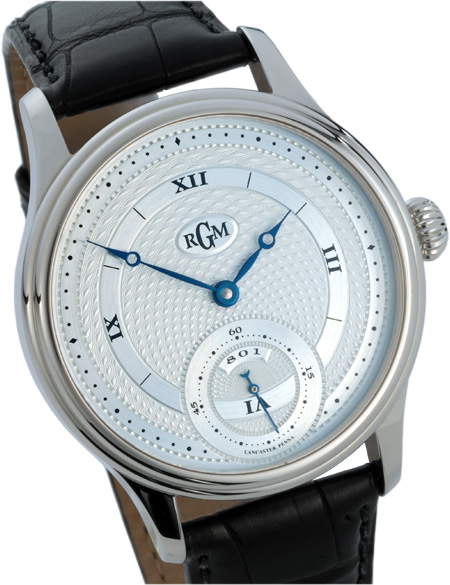 For 2008, RGM expects to produce between 75 and 100 Caliber 801 movements. Initially, Caliber 801 will be available in any case configurations that RGM already provides for housing movements of its size (a movement with comparable dimensions is the Unitas 6498 found among the movements used in RGM watches), but plans are in the works for a special case which will only be offered with the new movement. Any existing RGM model that uses the Unitas caliber will be available as an upgraded Cal. 801-powered edition, but retro-fitting of the new movement to watches that have already been sold will not be offered. Special limited-production pocket watch versions are also being discussed. Connoisseurs of RGM & American horology have much to be proud of with the introduction of Cal. 801 and are advised to watch for future announcements from Lancaster County, PA. In a recent interview, Roland Murphy hinted that some special editions of the Cal. 801 are being considered—possibly with complications—but he stated that any variants of the base 801 will require additional R&D. Actual production plans have not been disclosed.


The introduction of Caliber 801 is meant to celebrate not only a milestone in the history of RGM Watch Company but also in the tradition of American horology, of which RGM is clearly the modern era's major proponent.